I sat in the Starbucks up in Lake Forest, IL last Sunday, a bit nervous and excited about the woman I was about to meet. Dr. Annita Sawyer, a professor of psychology at Yale, had agreed to take an afternoon break from her writing stint at Ragdale, a nearby artist’s retreat where she is a writer-in-residence, to have a cup of coffee, and talk about a history we had in common. I had spoken with her a few months back about a documentary that I want to produce that is in its infant stages.  I asker her to be in it and she expressed interest.  I had done two residencies at Ragdale, so we had that in common as well.

But this meeting was symbolic of something greater than any of that. We are both survivors of a broken mental health system and have lived to talk about our experiences and become advocates. Meeting someone else in person who had had an experience similar to mine was a big deal.

Tucked in my purse was a copy of Dr. Sawyer’s recently published memoir, “Smoking Cigarettes, Eating Glass” about her battle with mental illness when she was a suicidal teenager in the 1960s living in New York. She was misdiagnosed with schizophrenia, hospitalized and suffered 89 shock treatments. Yup. You read that right. 89 shock treatments. The treatments wiped out over a decade of memory, and buried the trauma that had been the source of her illness. Eventually, with caring doctors and appropriate treatment, she began to recover. She went on to have a family, graduate from Yale, and become a successful therapist, all the while concealing the secret of her past.

But then she decided to get ahold of her old hospital records.  Buried memories came flooding back, nearly breaking her all over again. She felt outraged that her doctors kept prescribing shock treatments even when they doubted their efficacy.

Starbucks was busy so I was glad when a quiet corner table in the back opened up, two leather chairs in front of a small round table where I put my chai latte and waited.

Soon, a petite woman in her early 70s came in looking around at the various tables for me. She looked like her book photo. Small and slender with short grey hair and clear glasses,  Dr. Sawyer looked youthful and spry in her purple fleece jacket with an embroidered flower pin on the lapel, a light purple scarf around her neck, chalk colored jeans, purple print socks tucked into a pair of sneakers, and a book satchel over one shoulder.

“I have to give you a hug,” I said when I  greeted her. She was nice about it. Not everyone wants a stranger to hug them. But when I saw her in person, I felt taken by this brave survivor and her fiercely honest and poignant  book.  And having read her book, I thought as many readers probably do about authors they’ve read, I felt I knew her, which she said herself later in our conversation. (“You know what I eat for breakfast,” she laughed at one point. And I do.)

“This is a real treat,” she said smiling when she put her drink to her lips. I told her I had felt intimidated about meeting her. She said her patients often commented that they think she’s strong and tough despite her petite stature and quiet voice. She asked what I thought about her now that I’d met her,  her eyes bright. I forget now exactly what I said, but I felt comfortable, relaxed. She was warm and approachable. Right there, present.

She asked if I had told anyone else about my experience. Friends, I said, and I’ve written about it. But I realized only later that unlike Annita, who has gone public with her story, shed her secret, I still live with mine for the most part. It’s been scatter shot. I’ve told people consciously and sometimes told others rashly and it didn’t feel right. But that will change today when I publish this post.

We talked for over an hour. I told Dr. Sawyer about my own horrifying experience in Dallas about 30 years ago when I was in my 20s. in 1986. I was misdiagnosed with schizophrenia, admitted myself voluntarily to a hospital where I stayed for 6 months until I accepted my diagnosis. For nearly four years, I was ground through the Texas mental health system, even diagnosed with a brain tumor that I later learned never existed, all culminating in my being held against my will in a famous, once highly-regarded institution, Timberlawn Hospital, that was about to declare bankruptcy. It was then that I realized the system was sicker than its patients.

When I got copies of my medical records—which I could not read for years, because the wall of professional words left me feeling ashamed, angry and helpless—I found over half-dozen diagnoses in my charts. The cluster of doctors involved in or asked to consult on my treatment couldn’t agree on what I suffered from but they never questioned their course of treatment or the most stigmatizing of diagnoses. My own personal history of trauma got buried under a slew of diagnoses and severe treatments that made me simply vanish as a person.

Dr. Sawyer sat perched on the edge of her chair, listening attentively, shaking her head and asking questions from time to time. She talked about giving talks around the country to various organizations and groups about misdiagnosis and the need for professionals to listen, to take care with their patients. And how many people (a lot) came up to her after her talks and whispered to her that they had had a similar experience, and that she was brave for speaking up because they didn’t feel they could.

She said she wanted to normalize mental health problems, which would mean—and she struggled to find the right words—people could speak up about having mental illness, their experiences in the system without being stigmatized. That most people’s experience in life is ups and downs, and she made a long wave with one hand in the air. Her dream is to have a symposium where professionals and others can come together to give voice to and share their experiences. I hope that can happen.

Circling back to my own experience, I shared with her the analogy that’s always come to mind for me when it comes to abuse in the system, and the systemic problems that cycle back in the news on a regular basis. “Unless you hold everyone accountable not just the bottom feeders,” I said. “you’re just clipping the dragon’s toenails. We have to cut the head off the beast.” The chief psychiatrist at Timberlawn was a former president of a psychiatric hospital association when I was there. Could I really expect to submit a complaint to that organization or to the boards and be taken seriously? Too many doctors can hide behind their credentials, Camouflage. Annita’s face lit up. “That’s a wonderful metaphor,” she said. “I see that head as silence.” Power, on one hand, the beast, and the silence from stigma that needs to end.

The time went fast, of course, and she had to go. So much to ask and share and say. “I didn’t blow it?” I asked her, saying I’d so wanted the meeting to be a success, I’d felt a bit overwhelmed about it. She gave a big smile and laughed saying no, I hadn’t blown it. I’m looking forward to continuing my conversation with Annita. And I hope there will be more chances for people like us to gather on-line and in person to talk. More reunions.

I walked to a coffee shop near my office recently. The young barista asked how my day was going so far. Usually I say what most of us say, ‘fine,’ or ‘sick of wearing my winter hat,’ or whatever banality comes to mind. But in my amped-up state I answered her straight up. ” Honestly,” I said. “I’m feeling sort of anxious.”  We talked for a moment then she said earnestly, sweetly. “I’ll pray for you.” And I ordered my coffee.

I walked fast, confidently, back to the office, trying to dissipate that carbonated feeling in my blood and nerves. What makes me despair at times, well, a lot, is my inability to calm myself down, to talk to myself in a way that feels soothing enough to have my sparkling blood be still. Every anxiety-provoking thing hits the same spike on the needle no matter how seemingly smart I’ve become about what’s causing it. You’d think my neck was being measured for the noose.

Back at the Hancock elevators, I smiled at people I would have otherwise passed, kidded a middle-aged stranger on the elevator who was carrying an empty coffee cup up one floor. “Long way to go for a refill,” I said, sounding almost giddy. “I would’ve taken the stairs,” he said laughing, “but I’ve got bad knees.” As the doors closed I said something like, “well, in that case you’re forgiven!” Anxiety is a private torture. But my anxiety can get mouthy. I was experiencing a weird kind of openness, vulnerability.

So what does all this have to do with water? 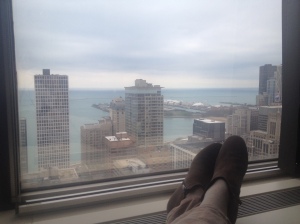 Like last week, my office today has a view of Lake Michigan. (I don’t have a permanent office yet so I’m a bit of a gypsy here).  When I walked in and saw the water,  I felt calmer. There is something about water. I never feel alone when I am near it. My desk faces the door so I’ve been writing looking out the window, laptop on my thighs, feet up on the air vents. The water is calm with dappled waves. It is overcast. spittles of water on the window come and vanish. Two boats out on the water. I’m looking out over rooftops, mostly modern buildings, mostly commercial though a few have  stacks of empty balconies and a few rooftop gardens, The Navy Pier carousel wheel to the south. A crow sails past the window and disappears.

I could sit here for the rest of the day and just watch the world and the water. I can feel my heart beat slowing down, my head quieting to exhaustion.There’s something about the uninterrupted clouded blue that goes to the horizon. My mind relaxes, meditates on the stillness of things, the solid buildings, the water rippling, a regular beat, just enough to be a good distraction. Like a lot of lonely, essentially motherless kids, nature has always soothed me, been my friend.

Light is trying to break through. The boats have come and gone. I’ll just sit here until I head home in a few hours, looking out the window, and try to remind myself I can feel this calm again.